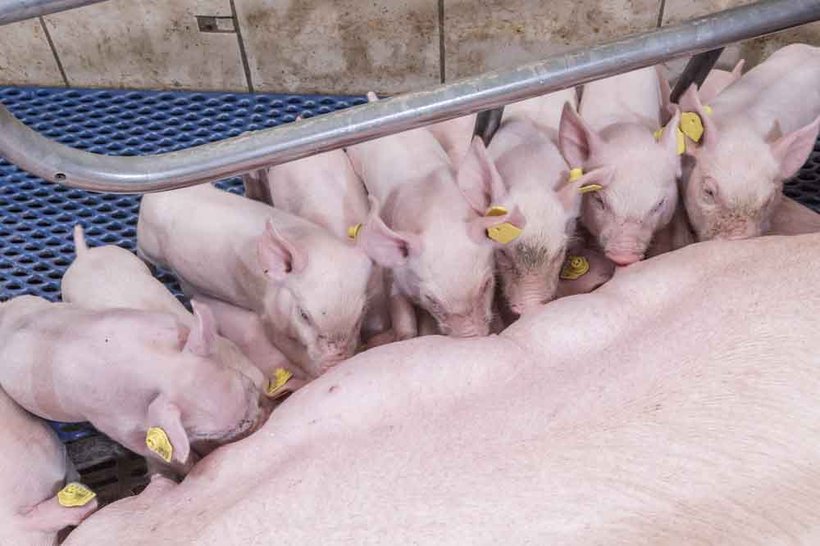 Hypor geneticists have spent nearly a decade to develop the Hypor Libra*, a sow that is capable of producing more than 30 piglets a year that reach 14 pounds (6.3 kilograms) in three weeks without cross-fostering or relying on milk replacer.

Achieving more than 30 piglets per sow each year has become an recognized measure of production efficiency around the world. Hypor geneticists say that producing large litters of live pigs is possible—when the right genetic traits are in balance. “If you develop a sow that is the best in one trait, such as prolificacy, then the risk is that the sow will lag behind in other areas,” say Hypor director of global operations Jeroen van de Camp. “A sow needs to balance prolificacy with litter uniformity as well as be capable of raising her litter.”

The key to efficient raising large numbers of finishers is to breed for litters that are uniform in size and weight at birth. Litters maintain their size variance throughout the growing period. A large weight difference between the largest and the smallest pigs in the litter results in groups of finishers being kept back longer in order for the small pigs to catch-up to market weight. “Variation in finisher weights is one of the biggest economical struggles for pork producers,” says Hypor Europe General Manager Nicolas Alvarez Hoggan. “An average birth weight of 1,400 grams can have a potential weight difference per pig between 1,000 to 2,300 grams—this variation can mean a significant difference at finishing.” A five percent variation in weight can be a difference of $22,397 (20.000 euros) for a 1,000-head sow operation.

To develop a sow that produces uniform litters, Hypor continuously measures the birth weights of each individual pig at our nucleus units. Unlike taking the average litter weight, individual weights take into account if a litter has a small or large pig—and how that will affect the number of full value pigs. Piglets that have low birth weights are less likely to be rated at full value by slaughterhouses according to a presentation at the 2016 International Pig Veterinary Society Congress (IPVS) Dublin by John Mabry of Iowa State University. According to the presentation, How to Deal with Success in Genetic Improvement, the probability of a piglet being full value decreases by 2 percent for every 0.1 kg decrease in birth weight. And for every 0.1-kilogram decrease in birth weight, mortality increases by 3 percent in pre-weaned piglets, and by 2 percent in weaned piglets (IPVS 2016, P. 64). By balancing breeding traits for litter size and uniformity, a sow is able to increase survivability without decreasing litter size.  “A uniform litter translates into a high survival rate and more finishers sent to market,” Alvarez says. “And the end of the day, the sow that produces uniform litters is going to be the sow that produces the most pork.”

It is imperative to understand that there is a difference between what a sow is capable of producing and what she is capable of raising. If a sow is producing more piglets then she is able to raise, then producers will end up with more foster sows, and will ultimately pay more for feed and labor costs. “The only way to effectively improve the number of pigs born and the quality of pigs is to measure each individual pig at birth and at 14-days—before they start eating feed,” van de Camp says. “This shows us if a sow has a sufficient milk supply to get piglets off to a good start.” As a result, the Hypor Libra* is capable of producing more than 30 piglets per year that reach 14 pounds (6,3 kilograms) in three weeks—without cross-fostering or relying on milk replacer.

“Achieving high piglet numbers is not a myth—the myth is that producers can rely on a pig that excels in only one area, like litter size,” Alvarez says. “We know that we don’t have the best sow in any one trait—but she is the best culmination of several traits.” The Hypor Libra* is the world’s most ‘prolificient’ sow—the sum of prolificacy and efficiency. Starting with the quality and quantity of the litter all the way to the number of finishers that hit the grid for market weight, the Hypor Libra* is bred to produce the most pork per sow and to help pork producers to reach for the stars.